The U.S. 2020 census will help federal agencies, lawmakers, local officials and non-profit organizations better understand many aspects of the baby boomer market, according to a recent Census Bureau article titled “2020 Census Will Help Policymakers Prepare for the Incoming Wave of Aging Boomers.”

Population trends for the baby boomer market (as opposed to the entire 65+ market) are demonstrated in the timeline below, based on data from the U.S. Census Bureau.

While the number of baby boomers as a percent of the U.S. population is declining, the total number of Americans age 65 and older is growing. The Census Bureau reports that by 2060, “nearly one in four Americans will be 65 years and older, the number of 85-plus will triple, and the country will add a half million centenarians.”

Finding accurate statistics on the baby boomer market can be confusing, particularly since some population statistics and projections focus only on the baby boomer market (those born between 1946 and 1964) while other numbers include all of those 65 or older. Additionally, data from the U.S. Census Bureau seems to have some variability from article to article. Our goal here, as always, is to present population projections as accurately as possible.

Additional ways of classifying older Americans include the following:

Each “old” age category implies the need for a different set of products and services.

Factors in the Aging U.S. Population

People are now living longer, due in large part to enhanced healthcare. Seniors who reach the age of 65 can expect to live another 19 years (as of 2010), compared to only 11.9 additional years as of 1900.

At the same time as the baby boomer market is growing, the U.S. birth rate is declining. The U.S. fertility rate is now 1.7 children per woman, compared to the 2.1 ratio needed to maintain a population. By 2034, the population of older adults will exceed that of children under 18 for the first time in U.S. history.

The total number of U.S. residents (the baby boomer cohort + others) aged 65 or older is projected to total 88.5 million by 2050, according to the U.S. Census Bureau. This number represents a doubling of the 65+ population, which stood at 40.2 million in 2010.

Data from the 2020 Census will be used to allocate state and federal funds across a wide range of social services programs that serve older Americans. Some of the leading programs include the following:

The total U.S. population is expected to increase from 314 million people in 2012 to approximately 420 million by 2060, for an increase of 34 percent. As part of this growth trends, the population will also become more diverse racially and ethnically. Residents who are now considered minorities will become the majority of the U.S. population overall by 2043, according to the U.S. Census Bureau.

Shown below is a U.S. Census Bureau graphic that indicates for the first time in U.S. history, older adults are projected to outnumber children by 2034. 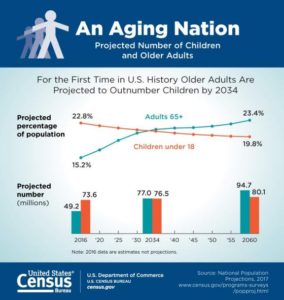 Sixty Five Plus Marketing, Inc. is a baby boomer marketing agency that works nationally. We create integrated marketing communications program designed to help suppliers to the senior market strengthen their relationships with clients, prospects, family members, and referral sources. Contact Margaret Grisdela via email or at 561-330-7280 for more information.

This article is provided for educational purposes only. While efforts are made to insure the accuracy and timeliness of data, the reader is encouraged to consider additional resources as needed.

Baby Boomer Homeowners are On the Move

Sixty Five Plus Marketing, Inc. is a national marketing agency that helps businesses connect with the 65+ senior market. We focus on the healthcare, travel and leisure, and professional services markets. Contact us via email.